City of Eugene Parks and Open Space team members care for over 4,000 acres of developed parks, natural areas, and street medians. Over the past 20 years, employee led innovations have resulted in the steady decrease of pesticide use. Eugene adopted the Integrated Pest Management (IPM) philosophy in the early 1990’s which requires weed managers to carefully set thresholds for weeds, regularly monitor for the presence of weeds, choose the most effective and least toxic method for control when a weed population rises over the threshold, and then monitor results. Employees have become experts in maintaining parks with minimal pesticide use, have set aside sensitive areas where pesticide use is restricted, have improved park design to limit future needs to use pesticides, and have identified easy to maintain parks where pesticide use isn’t needed.

Although pesticide use has been greatly reduced, pesticides are used when necessary to manage noxious and invasive weeds as well as pest infestations near higher use areas. Their use in these instances reduces stinging insects such as wasps in high use areas, removes invasive non-native weeds so diverse native habitat can establish and thrive, and maintains the clean appearance of parks. With over 80 acres of parks to maintain for each park operations staff person, pesticides are used at times as a cost-effective method to steward the City’s park and open space lands.

The banks of Delta Ponds were dominated by Armenian blackberry 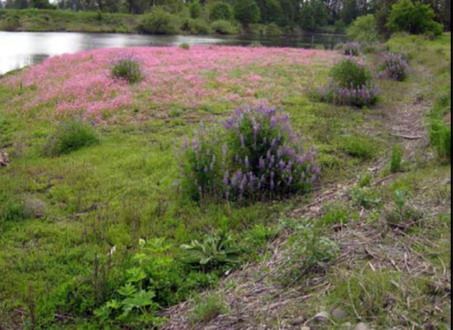 After blackberry removal, turtle nesting areas are seeded with native plants, and 70,000 native trees and shrubs were planted and are now thriving.

To reduce the need for pesticides, Parks and Open Space staff use mechanical techniques such as mowing, propane weed burning, hand weeding, crack sealing, and mulching first before using pesticides. Our staff are experts in identifying individual weed species and understanding which methods are the most effective on each weed. Because techniques like weeding and mulching are more labor intensive and expensive, youth crews, jail crews, and volunteers are often enlisted to help with large weed management jobs.

Many of Eugene’s parks are essentially pesticide free from year-to-year because they have simple landscapes that don’t require many maintenance inputs to keep them looking good. Park maintenance staff don’t apply pesticides as a matter of routine. Each application is reviewed by supervisors and managers. Chemicals are carefully chosen that are least toxic to the environment and most specific to a particular pest. Whenever it is necessary for the City to use pesticides, the application is made by experienced, state-licensed applicators.

The way parks are designed is a large factor in our approach to weed management. Park planners and designers have been working closely with maintenance staff to design maintenance friendly parks that reduce the need for weed management. Parks and Open Space staff recognize that landscape beds, fence lines, and tree wells are the most difficult places to maintain with low staffing levels without the use of pesticides. As a result, park designs are changing. There are fewer landscape beds in today’s parks than there were in the past, recycled wood chip mulch is used to suppress weeds around tree wells, shrub beds are filled with aggressive, low maintenance plants which spread to cover bare bed space, and new fence lines are installed with concrete mow strips under them to reduce weeds. A park landscape dominated by grass and trees is the new model for reduced weed management in parks. In our recreational turf areas weeds generally don’t pose a safety risk and often don’t affect usability; these factors mean herbicides are seldom needed to manage recreational park turf.

The City of Eugene has 10 pesticide-free neighborhood parks located throughout the City’s park system.

What is a pesticide-free park?

What makes a successful pesticide-free park?

The most successful pesticide free parks are those that were already easy to maintain. Small parks with either few, small, or no landscape beds require very little pesticides to keep them looking good. Large community parks, parks with large landscaped areas, and older parks with outdated design require high levels of maintenance to keep looking good. In these cases, pesticides are used more frequently to keep parks looking good on a tight budget.

Why does the City of Eugene have a pesticide-free parks program?

The City’s pesticide-free parks program is an opportunity to showcase alternative methods that are available to solve pest problems without pesticides. By demonstrating other ways to control pests, the City will encourage our community to use less of these chemicals.

How are the parks different?

Some areas that are difficult to maintain, such as large shrub beds, fence lines and the areas under trees, may look less manicured and more natural than at other parks. The City of Eugene will continue to ensure that all parks provide an inviting and safe place to be enjoyed by all.

How does a park or natural area become designated as a pesticide-free?

Your comments and questions about the program may be directed to: City of Eugene Parks and Open Space Division

The City of Eugene’s Pesticide-Free Parks Program is a partnership with the Northwest Coalition for Alternatives to Pesticides (NCAP). For information about NCAP and other pesticide-free parks programs, contact:

Short URL to this page: www.eugene-or.gov/pesticidefreepark 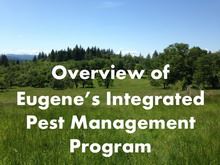